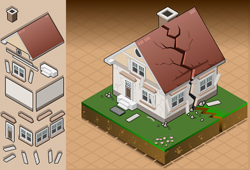 magnitude earthquake in the area of Hollis, just west of Portland. The quake was felt as far away as Boston, Massachusetts as well as New Hampshire and Rhode Island. Though no serious damage or injury has been reported, the earthquake spurred a number of questions from homeowners regarding insurance coverage for such events.

Earthquakes are usually associated with the state of California and other western states, but earthquake fault lines run across the Midwest, the South, the Southeast and the Northeast. In fact, 39 of the 50 states lie in moderate to high-risk areas for earthquakes.

Damage from an earthquake can be very minor, or it can cause serious structural damage to a home or building. Generally, wood structures have the flexibility to withstand strong earthquakes. Stone, brick and adobe buildings withstand the severe shaking poorly.

The earthquake itself is not the only problem that can cause damage to a structure. Cracks in the foundation, flooring, window frames, and chimneys can occur. Entire walls can collapse, and interior structures can become severely compromised, requiring extensive rebuilding. Adjacent structures can become unstable and fall onto roofs and walls. Aftermath events such as tsunamis, fires or floods can create additional damage.

Earthquakes are not covered under standard insurance policies. You must arrange for a special endorsement, to your Homeowners Policy, to cover damage from earthquakes.

Earthquake coverage typically includes a deductible of anywhere from 2 to 20 percent of the replacement cost of the home or building. As always, the higher the deductible, the more that homeowners can save on premiums. The cost of an earthquake policy can vary considerably from $85 per year to several hundred dollars.

A number of different factors can influence the cost of earthquake coverage. The soil consistency in your area can affect the stability of your home’s foundation. The age of your home can make it more vulnerable to earthquake damage. The type of construction materials used will affect the price of the policy. The structure’s proximity to known fault lines can also cause you to pay more for your earthquake insurance.