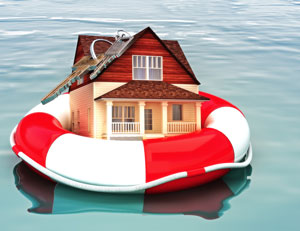 When you think about flooding, you may imagine storm surge from a hurricane, or a dam bursting or even a river overflowing its banks. If your home or business is located far from these hazards, it’s easy to feel safe. Unfortunately, feeling safe and being safe are two different things.

According to the National Flood Insurance Program, almost 20 percent of flood insurance claims come from areas that are at low to moderate risk of flooding. Even properties far from bodies of water can suffer damage.

How do floods happen?

What is a flood?

A flood is defined as a temporary inundation of two or more normally dry properties from certain natural sources, including:

When these things happen, they can cause a great deal of damage very quickly. Even a few inches of water in a basement can ruin furnaces and water heaters. Water seeping into living spaces destroys flooring and damages walls.

Most property insurance policies won’t cover repairs. Federal disaster funds often come in the form of a loan that must be repaid — with interest. Flood insurance claims average almost $4 billion per year. The NFIP has paid over $48 billion in claims since 1978.

The National Flood Insurance Program was created to provide coverage to property owners regardless of their risk. The rates are the same across the country. Policies are purchased from private insurance agents, and administered by the NFIP. In low risk areas, the premium can be as little as $129 per year. Flood insurance may be required in order to get a mortgage.

When to get flood insurance

If you don’t already have flood insurance, the time to get it is now. There is a 30 day waiting period before coverage goes into effect. Flooding can happen any time of the year, even during the cold weather. It’s better to have the policy in place before the water rises.